A Tale of Two Houses


If anyone says: "Let's see what this does," "What does this do," or "Let's try this," we're already questioning the situation and thinking up escape plans or excuses to leave.

Dudes! Me and my kid sis kicked it this weekend, we went to two haunted houses, a convention, got lost in the middle of now where twice, meet all kinds of awesome people, spent way too much money and are gonna eat dinner at mom's house tonight cause now we're both broke!

I don't have a DVD pick of the week this week so instead I am going to be reviewing the haunted house we went to.

1st up: Friday Night: Georgetown Haunted Morgue
The 1st thing we noticed right off the bat was how long the line was... 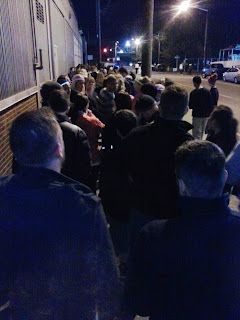 Usually for me that goes in the con side but with some of the actors walking up and down the line scaring people and a guy with a chain saw chasing people thru the food court the organizers turned it into a pro.

When we heard screaming from behind us we turned around and came face to face with this monster! 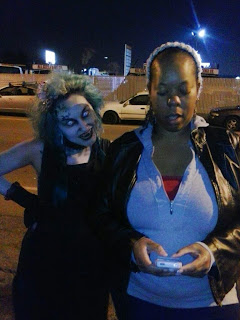 I stopped her and asked if she would pose w/me. She did, and apparently that was the million dollar question because after my sister took this picture she upgraded us to VIP and moved us up to the front of the line.

The special effects and ambiance were really good. There was a real feeling of claustrophobia, the sets were believable and the actors were great. Even thou it seemed longer it was only about 15 minutes, which was time enough because there was so much stuff going on it causes a state of sensory overload. The highlight of that haunt was when we thought we were trapped because we could open the doors and then we realized that we had to squeeze thru these giant balloon air table things stacked high with body parts anhalf way thru Pinhead shows up to block our path. When the clown w/the chain saw popped out my sister went all 'save yourself' on my ass and left me as she bolted from the manic clown.

Ok so this one is a haunted trail in the middle of the woods. 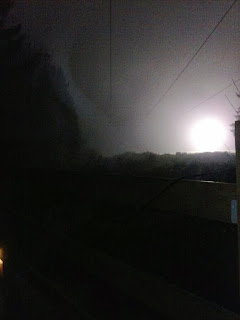 This is the only picture I got because we were at Geek Girl Con http://www.geekgirlcon.com/ earlier in the day and my phone died. The location itself and the weather became huge characters in this haunt. It was foggy making it darker than it was already was, distorting the things you actually saw along with thing things you thought you saw and muting the natural sounds you would expect to hear while walking thru a forest. And then it started to rain.

A highlight of this haunt was the fact that a huge part of the cast of characters are children. We knew we were going to stumble into a Deliverance scene because we heard the banjo but the spine chiller for that set was when a child who is far too young to have seen that movie sneaks up behinds you and starts quoting from it...and nails it! One of the things that unintentionally heightened the tension for my sister was when some of the monsters and even a zombie called me by name. The horror community here in Seattle runs in small circles so a lot of us know each other, but she was completely caught off guard (and I was too) and she didn't like it. Another awesome feature was the fork in the trail that gave you the option of scary or scarier of course we went down the scarier trail and paid dearly for it =D

The part that fucked us up were the horses, we didn't hear them coming and by the time we saw them we were nearly right under them and it wasn't until I backed away that I saw the headless riders!

The Georgetown Haunted Morgue is a traditional haunted house and if you've been to enough of them you can predict what's just around the corner. But with that being said, it was scarier than I thought it was going to be and with the way the organizers worked the crowd I am going to have to rate it 4.5 stars. Out of the two this is the one my sister liked the most.

The Nightmare at Beaver Lake was my favorite and here's why. The wooded trail, fog, and rain made everything scarier because it let's your imagination do most of the work. Another thing that turned into an unintentional bonus was my sister hurt her ankle so we couldn't run so we moved out of the way of those who could and the result was that we spent most of our time on that trail alone. Just me and my little sister...In the woods at night...Holding hands breathlessly awaiting the arrival of zombies, vampires, headless horsemen and...

I'm giving this one 5 Stars. Have a good one guys

Posted by From the pen of Crystal Connor at 4:41 PM 2 comments:

From my friends & fans with love!

Things you never see black people doing in horror movies, thing #1:
Vacation at Chernobyl
This DVD pick of the week comes to you via my friends, fans, and followers on Facebook. I watch a lot of horror movies and the ones with at least a 3 star I like I review and post them here on my blog.

I'm a tough customer, so for the most part, while watching horror movies, all I do is scream at the people on the screen and post my frustrations as status updates.

Well about around 11pm last night I got multiple posts of this movie trailer to my wall with everyone saying the exact same thing...'this made me think of you' lol, I can't tell you how happy this movie trailer make me and I never get tired of watching it! Its hard to pick but if I had too my favorite part would be the VCR scene. Well without further adieu here is the trailer for the movie


Hell No.
Posted by From the pen of Crystal Connor at 2:16 PM No comments:

The Rhythm: a Short Poem 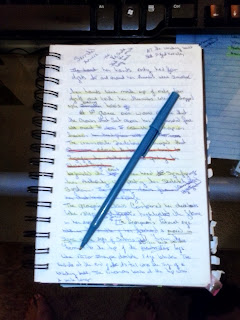 Nearly famous, best-seller wannabe author Crystal Connor falls victim to The Creature of The Mist, as she ignores her own advice posted here and on Facebook and wanders off, alone, in the dark, snapping pictures for Instagram.

At 2:37 AM a neighbor called police to report an 'eerie silence' coming from the upstairs apartment. The police attempted entry but was halted by a little black dog hording what seemed to be a 1,000 tennis balls and aggressively guarding snacks. A sweep of the area only revealed the author's phone.

"This is just so unbelievable," the downstairs neighbor said requesting to remain unnamed. "Between the hours of like midnight to about four in the morning, I would hear her screaming bloody murder to some poor lass in a horror movie who was lost in the wilderness or had hid in the closet. To think she now shares their untimely fate, I guess you never really know someone. I have no idea how I'll ever be able to sleep engulfed in all this peace and quiet."


Here are a few of the images retrieved from the word-smith's phone. To view the entire college entitled "It Was a Dark & Stormy Night" and other random ass pix please visit and follow her on Instagram: