The Christian, The Witch, & Me.

Live Action Reviews! By Crystal Connor
At 7:30 pm on April 3rd 2016, Crystal Connor, brought home a pizza flopped on the couch, wrapped herself and the dog in a blanket and picked up her remote.

This is the unedited journal chronicles the harrowing experience that her neighbors endured for hours as she screamed, cried, and shouted expletive obscenities at her television as she watched Phil Stevens indie horror film Flowers… 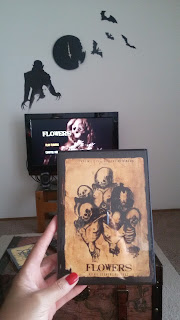 Entry 1: At least she’s smart enough not to scream and stay where she is.

Entry 2: So basically she was for dead

Entry 3: Guess Buffalo Bill wasn't the only one into thick chicks…

Entry 4: How are you gonna get thru there, and are you sure you even want to?

Entry 5: Just calm down, you’re not safe yet!

Entry 6: Why is there no pain?

Entry 8: What the fuck dude, go if you’re going! Goooooo!

Entry 10: Fucking A! No one fucking listens

Entry 11: Ok, seriously what the fuck, is this purgatory

Who would like it: This is pretty extreme but if you got through A Serbian Film you should be ok. But it’s not really fair to compare Flowers to Serbian because unlike the latter Flowers isn't just shocking for the sake of being shocking.

Overall / High Points: I think watching horror movies should be an ‘interactive’ activity (which is why I watch them alone) and the more I yell at the people on the screen the more fun I’m having. I’m a tough customer and I can be pretty unforgiving when it comes to the myopic way in which I prefer to be entertained, so before you get the wrong idea by the small number of entries, let me just say right off the bat that I really liked this movie. The trick now becomes trying to figure out how to tell you why…

Watching Flowers was like watching The Cabinet of Dr. Caligari, or maybe more like Alraune, but again Flowers really isn't a silent film. I mean it is but it’s a little bit more than that because there is absolutely no dialogue. Which is one of the things I really like, and is the main reason I am having trouble trying to explain this movie.

The narrator in this film is your imagination which means it will be different for every single person who sees it. Because no one is talking the heroines in this movie bring it, they have to, the lighting and the way Flowers is filmed is very Hitchockian which only serves to add to the distress, so your stuck right there with them, trying to figure out what the hell is going on right along with them.

My favorite scene is with the last girl in the vanity/dressing room, it was as if you could actually hear her international dialogue. At 1st I thought she realized her situation but then tried to change it and save herself. It left me thinking that she had become both the doctor and the monster, but then when the scene fades from present to a flash back I was pissed off at her because I thought it was all her fault. Throughout Flowers, the women are clinging to a photograph, all of those pictures are in her room. And during the flashback all of the women are together in the same room, she’s the last to enter. The other women disappear one by one after being shown what circumstances lead them to this chance encounter, but as the end credits began to roll I wasn't so sure of my assessment.

Gore Factor: I am going to say 3, it’s not so much gore than it is muck.

Stars: 5
Posted by From the pen of Crystal Connor at 5:16 AM No comments: