Shhhhhh! I am now a member of a secret society.

Word of the Day:
Procumbent
PRONUNCIATION: (pro-KUM-buhnt) adjective:
1.Lying face down; prostrate.
2. Of a plant: Growing along the ground without putting new roots.

How to survive a horror movie tip # 4
If you find a town that looks deserted, it's probably for a good reason. Take the hint & stay away.

FINALLY! I have been accepted and am now a member of “secret society!” We have our own code, motto, pledge, and there’s even a secret handshake! Right now I am just an associate member. I have four more “test” I have to pass, and I will, before I can be considered to walk among the ranks of Full Membership.

I am so gonna bust my ass to make it thru the grueling, near death, don’t look into the light, initiation process because only then will I be allowed to participate in the Midnight Bloodletting Ritual to gain favor of the Dark Nether Demon Sha'Daadicus whose apocalyptic resurrection will bring forth a new age! 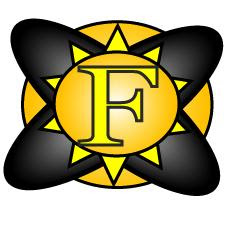 I am now a proud member of The Fictioneers, which is a group that promotes a family atmosphere and a strong support system to encourage the authorship of science fiction, horror, and fantasy tales; and also commits to the pursuit of excellence in the writing of fiction of the fantastic. And actually that’s the motto of the “Fictioneers Praeclarus Intus Scriptum,” Excellence in Writing. As you can see I wasted no time slapping our logo up on my blog.

When The Darkness was released I was so excited at the prospect of becoming a member of a writing association I started applying for memberships the day after the book went on sale a month later I was devastated over how pompous and condescending that most of these members and clubs are and I started to think that maybe being associated with these type of writing clubs wasn’t in the best interest for me or my writing.

Last year I attended two of my 1st horror conventions and it was there that I heard for the 1st time the words “independent press” and it didn’t take long before I was wooed. There was no “Now that I am a published author I can’t talk to unpublished wanna be writers, or offer tips on your work” clause it was really quite the opposite.

The 1st person I spoke with via email was author Robert R Best, and when he found out I was about to be published not only did he cheer me on he gave me tons of contact info on where to submit some of my other work. If it weren’t for Robert I would have never met Timothy Long or Jonathon Moon. Thru John I met Jessica, Rebecca & Matt. Tim introduced me to Stephanie. I learned about a group called Black Science Fiction Society at a convention and have meet too many amazing authors and graphic novelist to list.
As a whole the indie writers is not such a secret society…but it’s definitely a society that I am proud to be a member of. For more information about the Fictioneers check us out at:
http://web.mac.com/shadaa1/Fictioneers/Welcome.html
Oh and btw, the whole conjuring up a demon thing isn’t real…or is it?
Posted by From the pen of Crystal Connor at 1:30 PM 4 comments:

Word of the day:
Expostulate
PRONUNCIATION: (ik-SPOS-chuh-layt) verb: To reason earnestly with someone in order to dissuade.

How to survive a horror movie tip # 19
Never publicly announce your plans for the future if you make it out alive. It guarantees that you have no future.


H.A.T.E.R.S = Having Anger Towards Everyone Reaching Success
So there was this woman who owns a web-designing firm that I had to take to court last year, and to be completely honest with you I totally forgot who she was until I read the 1 star “review” she posted on Amazon about The Darkness.

If she didn’t have her picture posted to her Amazon page I would have never known who she was. I was laughing so hard when I read it I had tears running down my face and I had to flip thru archived emails because I couldn’t even remember her name.

It’s interesting that someone would be able to review a product without purchasing it 1st, and I know she hasn’t bought a copy of The Darkness because the very last thing that she’ll ever do is put money into my pocket.

It’s really creepy and sad that after all this time she doesn’t have anything else to do but stalk me online and post spiteful little comments, but at the same time, it’s flattering in a twisted little way that someone I’ve completely written off and forgotten about not only still thinks about me but invests the time to look me up and then write a snide little comment.

In a way that I can’t explain I actually like that, I think that naysayers and people who go out of their way to criticize is a truer measure of one’s success. Because if I was working a dead end minimum job, or living out on the streets she wouldn’t say anything, because she’d would be genuinely happy to see me that way…

But I’m not; I am enjoying the benefits of owning my own company, which allows me the time to chase my dream as a writer. The Darkness is my 1st novel and its being warmly received, my short stories are being accepted for publication with two different publishing houses and I am about half way done with Book II in The Spectrum Trilogy.

I am about to start a two-month tour and will be a vendor at a few horror and science fiction conventions. Hopefully there will be more people who publicly display their distain for my success because that will only mean that I am on the right track. So in the words of a famous comedian…

(Warning expletive)
Posted by From the pen of Crystal Connor at 5:30 AM 3 comments: