How to survive a horror movie tip # 71
If it's late at night and your dog suddenly perks up his ears and growls lowly in his throat, never EVER say "Whassa matter Boy? Gotta go out?"

Today’s Horrorscope: You would make an excellent librarian, as nothing pleases you more than curling up with a dusty old book that hasn’t see the light of day in centuries. But just as most books open the gateways to the imagination, others open gateways to dark, unspeakable dimensions. When in doubt avoid, avoid reciting cryptic incantations.
Beware of: Keys made of finger bone.

So last week I was made aware of two things: 1st that you can not leave a comment on the DVD Archives page (insert explicit language here) and that 2, I haven’t posted a DVD pick of the week since Nov. You guys not being able to comment on the archive page upsets me but it gave rise to a new post idea.

It’s going to be called “Mouth Off Monday’s” and basically its going to be an open forum so that you can post a comment about anything you’ve read here on my blog on my fan page, you can leave comments/reviews about one of my books or short stories or just post a comment to say hello.

As for the DVD pick of the week, yes I am way behind, and the reason I haven’t posted a DVD review in awhile is because I’ve been writing. I’ve started the final book in The Spectrum Trilogy, I’m working on shoring up the last of the stories that will be featured in “…And They All Lived Happily After!” and I’ve started kicking some ideas around for another novel. This will be a stand-alone book that has nothing to do with the trilogy.

Plus my circuits of conventions is coming up real quick so I’m sorry about the movie reviews but I’ll be back at it once things start to slow down. I’m going to try and post again later this week, so until next time, the floor is yours =D
Posted by From the pen of Crystal Connor at 7:57 PM 2 comments:

Word of the day: Poseur
Pronunciation: (poh-ZUHR) Meaning: One who behaves in an affected manner to impress others. (Am I the only one who thought this correct spelling of this word was: poser?)

"On Wednesday the American Booksellers Association's for-profit subsidiary, IndieCommerce, began removing all Amazon titles from its database. The actions followed decisions by Barnes & Noble, Books-A-Million and Indigo to not carry Amazon Publishing titles."

OMFG, I’m not really sure how I feel about this one. It reminds me of the crusade that was lead against Bill Gates in my city a few years ago. Apparently the ABA is up in arms over Amazon’s new launch of a promotion that allows authors to sell their eBooks on Amazon exclusively for 90 days. I opted out of this option only because for me, it wasn’t that practical for two reasons. The 1st being Artificial Light is sequel, so to limit it to just one retailer when The Darkness was purchased from both Amazon and Barnes and Nobles wouldn’t made much sense. The 2nd reason I didn’t go that route is because the #1 device the digital copy of The Darkness was downloaded to was not the Kindle but android smart phones.

Speaking of all this digital downloading and Bill Gates, I live in Seattle and my beloved city is known for more than just the rain, it's coffee snob/junkies, and serial killers. We’re known also as a high-tech city. Out of all the major US cities Popular Science ranked Seattle as #9 giving us a score of 87 out of 100. Guess where Amazon is located…yep right here in the Emerald City.

“My biggest point is that ABA and B&N need to compete with Amazon, rather than whine and obstruct. I'd love for them to provide competitive opportunities, tools, and other incentives that only Amazon offers. ABA and others complain (not without some justification) that Amazon locks them out... well, B&N, ABA and other chains have provided almost nothing and thus have effectively locked authors out of their operations, leaving indie authors with only Amazon to work with.”
What an interesting concept…competion. Which was the very same agurgement that was offered when the those on the fringes demanded that Bill Gates be hung from the SpaceNeedle.

Compete. If you refuse to sell a product that I want you’re not going to win me over as a customer because I am not going to settle for whatever you it is your offering as an alternative. If you don’t have what I want, I’m simple go to where I can get it. Even if that means I have to go through hell to do so.

Compete. Because I’m not the one your hurting if you don’t…and no one states more elquently that Mr. Perdue himself.

Read his take on it here:
http://lewisperdue.com/?p=1221
Posted by From the pen of Crystal Connor at 2:26 PM No comments:

Word of the day: Babel
Pronunciation(BAB-uhl, BAY-bunl) noun:
A confused mixture of noises or voices
A scense of noise or confusion

How to survive a horror movie tip # 49
If an item has "evil"/"demonic"/"cursed"/etc in its name/description, this is NOT your cue to start playing with it.

So this upcoming Saturday I’ve been invited to a private book signing! The book club hosting the signing also invited another local book club and I’m really excited about this event.

It’s still kinda jarring that people want my autograph and book events with me as the main event, and it still feels like having the wind knocked out of me every time someone I don’t know walks up to me and starts talking about something I wrote.

I used to be that person, that crazed fan who would send emails authors, stalk my favorites on Facebook, and run around conventions like a kid in a candy store with $100.00 to spend. I know how awesome it feels when to have a book signed or having my picture taken with mega superstars like George A Ramero and Malcolm McDowell

It feels just as awesome as taking a picture with locally famous people like horror model Jeanmarie Peck and renowned make up artist Dana Young or zombie novelist Eloise Knapp. 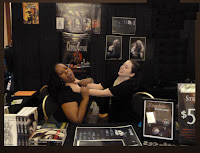 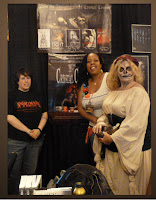 On Saturday I am taking my copy of The Darkness to the signing and I’m going to ask everyone find a blank section in the book, write a quick note about what they thought of The Darkness and then sign it because I know how awesome it feels when to have a book signed =D
Posted by From the pen of Crystal Connor at 8:01 PM No comments: