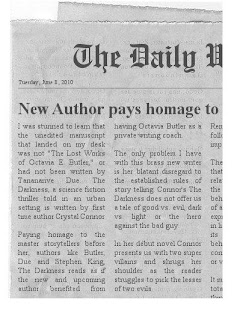 She took me on a wild, somewhat confusing (Good confusing that makes you go"What on Earth is going on here?!"and makes you want to turn the page!) and then she ties it all together in the end leaving you thinking "WOW!I didn't see THAT coming!"
--Kathi Vallade

I grew up telling spooky little campfire style stories at slumber parties. We’d make a tent in the bedroom, and the only source of light would be from a flashlight that was about to die. I’d tell my tale of doom and then while everyone was jumping at the tree branch scraping against the window and I’d be sound asleep!

Living on a steady literary diet of Stephen King, Robin Cook, Dean R. Koontz and healthy doses of cinema masterpieces such as The Birds, Friday the 13th, Hellraiser, The Outer Limits and The Twilight Zone; along with writing short stories specializing in the Science Fiction & Horror genres since before Jr. high School, it surprised no one that I ended up writing a horror novel!

My short story “The Ruins” was the runner-up selection of Crypticon Seattle’s 2010 writing contest.

“Crystal is one of the most positive, caring and focused person I know. I think her writing captures a mystic yet religious and scientifically aspect that touches a lot points and theories of the world.”
-- Latrice Hill, Jazz singer, and songwriter.

I was born on the Fort Lewis Army post in Washington State, on August 28th 1970 and I am a spoiled Army Brat in every sense. After graduating from Victor Valley Senior High School in Victorville Ca, I too joined the military. I served my country in the United States Navy working as a boiler technician on board the USS McKee AS-41 assigned to the 7th fleet.

“Crystal is a very creative and resourceful person who stands up for what she believes in and isn’t afraid to speak her mind. She is a joy to be around and always has better jewelry than everybody else.”
--Starre Ashley Lanton, Chief Enforcer for Crystal’s International Criminal Enterprise

While deployed at various ports-of-call throughout Africa, Asia and the Middle East I began to learn about other cultures’ monsters and nightmares and I use my world travels and experiences take you to some of the exotic places that I’ve been but have altered and embellished with my twisted view of how a story should end…while at the same time taking you on a journey you might not otherwise be able to afford or brave enough to undertake.

“Like all black Goddesses my sister is both creative and talented. Now that she is a rock star I just have three words: Bitches. Be. Ware.”
--Amani Darby, Crystal’s Principle Partner in Crime & Literary Rival

I am now living in Seattle where I operate my business Seattle Crystal Concierge, I’m a member of the Dark Fiction Guild, and belong to both the Authors Anonymous and The Seattle Women’s writing groups and I’m also an active member of The Critters Workshop.

The Darkness, is my first full-length novel, is published by Bennett and Hastings. My current projects, “…And They All Lived Happily Ever After” and “Artificial Light,” the sequel to The Darkness will be released in 2011.

“Crystal is the perfect example of a friend, honesty & creativity and is a positive role model for both my son and me.”
--Christina Blodgett, The Evil Redheaded Angel who’s whispering in Crystal’s Ear.

I know this ABOUT THE AUTHOR is unconventional and a little silly. I did it this way because I would like for you to know not only about my writing but also who I am as a person. I want you to know that I’m not some stuck up or pretentious author who thinks I’m the greatest thing to pick up a pen since Octavia Butler or Stephen King.

I’m still that goofy, nerdy, sometimes self-conscious chick who screams warnings at the people in horror movies and reads books about dragons.

If you wanna know anything else...just ask!