DVD pick of the week...Sometimes monsters are men. 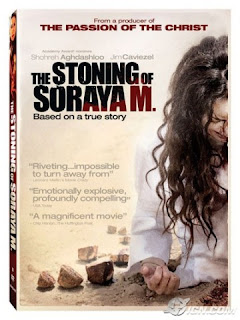 Everyone who knows me or anyone who’s surfed around on my blog knows that I am a huge fan of monsters in the traditional sense of the word. But sometimes monsters are men and when these men use and twist religion for their own personal gain these monsters are of the vilest of creatures.

Cyrus & Besty Giffen Nowrasteh’s 2008 The Stoning of Soraya M is based on a true story and extremely difficult to watch. We meet Soraya during a tribal divorce proceedings, her husband requested the divorce after meeting a 14-year girl whose rich father was to be put to death. Soroya’s contested the divorce not for her husband’s love but for child support for her children. Soroya’s aunt tries her best to protect her niece but in the village it’s a man’s world.

Not wanting to pay, her husband trumps up false charges of adultery – a crime punishable by death; by stoning. Her husband and the village spiritual leader force a widower to testify against her by threatening to imprison his mentally ill son.

Our director Cyrus Nowrasteh doesn’t give us a break. He makes us watch every single time she is hit but her husband,watch every false accusation,watch every neighbor turn their back, watch her father disown his daughter and watch every…single…stone…thrown.

Do you have any idea how long it takes to stone someone to death?!??

This gets 5 Stars outta 5 but be forewarned this movie is not for the weak and squeamish.
Posted by From the pen of Crystal Connor at 2:37 AM