DVD Pick of the Week...Two for the price of one! 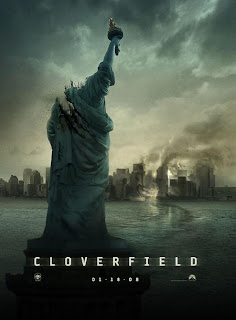 I can understand film makers wanting to capitalize on the success of the “docu-drama” style film making of The Blair Witch Project, but it’s been ten years, its time for a new idea.

Drew Goodard’s 2008 Cloverfield is set in New York. A group of friends get together to throw a surprise party for a friend who is taking a job in Japan. The idea is to film the party and give it to him as a going away present.

The festivities are interrupted with a loud explosion in downtown Manhattan, still feeling more than a bit jittery from the events of 2001 they immediately suspect a terrorist attack & their fears are confirmed as large projectiles rain down and began destroying the city! …or so they think.

What follows next is shaky footage and bad camera angles as the party goers flee the bldg to flood the streets w/others in their neighborhood to try and understand what is happening. All hell breaks loose when the head of the Statue of Liberty comes flying thru the air smashing bldgs and crushing cars and people before rolling to a stop in the middle of the street. There is a moment of surrealness as those that are not injured gather around to touch it and snap pix of it with their camera phones.

The group starts to wish that in was in fact a terrorist attack when they hear someone whisper “I saw it.” “It’s alive”, and “It’s huge.” The group attempts to leave Manhattan via the Brooklyn Bridge and while attempting to do so Rob gets a call from the woman he loves who’s pleading for help because she is trapped in her bldg…and then to make matters worse the bridge is smashed in half by the monsters tail sending countless of people plunging to their death! Including one of their own.

After escaping from the collapsing bridge watching their friend fall to his death, and being attacked by a monster the group is undoubtedly in a state of shock and horror but despite all this, Hud the man behind the camcorder, has the presence of mind to keep filming.

Rob follows a group of looters into an electronics store, his friends follow him and while Hud is trying to convince Rob its time to leave when he sees all the looters watching the news, and when he turns his cam to the flats screens streaming live news feeds everyone sees a giant monster being shot at by soldiers.

As if the idea of the city being attacked by a monster wasn’t hideous enough – its not alone, she’s brought her offspring…and they eat people. Rob finally finds the battery for his phone then charges to save Beth. His entourage chases Rob towards the mayhem trying to show him the errors of his ways when we’re treated to footage that could have be captured by a war correspondent embedded with the 2nd Brigade as the military races in guns blazing to fight the monster and her man eating babies.

The group manages to dodge the monster and bullets long enough to escape underground to the subway stations. Feeling relatively safe the group decides to walk the tracks to reach Beth. But just as the groups starts to feel safe…low and behold the creatures offspring escaped to the track tunnels as well. This is by far the best scene in the entire movie.

While running from the creature and her young, members of their group dropping off like flies, being caught in the crosshairs of a gunfight, in the middle of all the chaos and destruction they just keep filming.

These types of “lost footage” films have been done to death, there is nothing new and the endings are predictable.

I'm giving Cloverfield 1/2 a Star out of 5 and if that's not bad enough there are rumors of a sequel.


Ok guys this one threw me for a loop. Glenn McQuaid’s 2008 I Sell the Dead definitely fits within the Horror genre but it fits with the Comedy one too, actually I think it fits better within the Comedy slot much better. When I watch a horror film I expect the end result to have me be shooting at shadows & scared sleepless…so I was surprised to find myself watching an eerie little horror flick that, at times, had me laughing out loud. 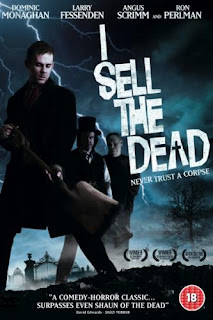 With that being said all n all I Sell the Dead is not a bad movie. In the opening scene we see a Mr. William Grimes being put to death by the guillotine. In the next shot we are introduced to young Arthur Blake who is awaiting the same sentence. In his last hours of life Blake in comforted by Father Duffy, to whom he gives his last confession.

What unfolds is the story of how became to be a grave robber, of how Mr. Grimes was his mentor and friend, and how sometimes the dead are not dead.

There’s something for everyone…vampires, zombies and even an alien. The plot is interesting enough to keep you watching but at times they just go over the top with the slapstick.

This is a hard one to rate because I am not into comedy’s…but I liked it, and there where real moments of uncomfortable eeriness and there’s a nice twist to the identity of Father Duffy so I’m going to give it a 3 ¾ Stars out of Five
Posted by From the pen of Crystal Connor at 6:42 PM