DVD Pick of the Week:If you call in the next 15 minutes we’ll even throw in…

As I said when I reviewed a movie called “I Sell the Dead” I do not like my horror & comedy blended together. With that being said David Bruckner’s, Jacob Gentry and Dan Bush’s 2007 The Signal is a phenomenal movie.

What sold me is The Signal is told is within three genres, which they brake-up into “Transmissions” and the end result is three little movies that when put together tell a whole viciously brutal story. 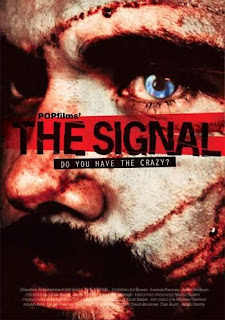 The 1st part of Signal is straight up Horror and it’s told in Horror’s perfect form. The opening scene looks a 70’s horror movie, and just as your about to look at the cover of the DVD to make sure you’ve got the right movie we find out it’s a movie there’re watching because all of a sudden the TV loses its signal.

We’re introduced to Maya & Ben two people who are clearly in love…but we find out the woman is married and Ben is not her husband. After realizing the time Maya tries to call her husband but her phone is dead and so is Ben’s house phone, so she flees from his apartment to race home. On her way she notices that things are “off” somehow and when she gets home we see why she’s having an affair. Her husband Lewis is large, brooding, and has a short temper and it’s clear she is afraid of him. It’s a slow and intense build-up before we’re thrown into full-blown madness and learn the signal on the TV is a transmission and it’s being broadcast over every single TV, radio station, and phone. And it’s turning men into monsters.

The 2nd part of Signal is comedy. It’s so over the top, dark and vulgar it’s disturbing, and it’s also the most violent and gory part of this film. You guys all know that I am not a big fan of gore for gore’s sake but by offsetting the outrageous satire with the excessive violence is what sold me. And sold me in a big way.

The last part of Signal threw me for a loop. It’s scary, suspenseful, and somehow romantic. Actually The Signal’s under current is a love story, the whole movie revolves around Maya and the two men who love her. Her husband’s love has turned dark, obsessive, and dangerous while her lover Ben’s love is pure, patient and romantic. All throughout Signal we watch Maya and Ben have flash backs of each other and we follow their horrific journey as they to try and find each other in a horrific world that has gone utterly mad.

This movie really worked for me. I really like the way Signal break between genres to let you know there is going to be a change of pace so I am giving it 5 Stars

So remember I told you that the opening scene looks like a 70’s horror movie? Well it is…sort of. The movie used in the opening of Signal is a little film called “The Hap Hapgood Story” And it’s featured in the DVD extra’s. It a short film only 10 minutes long but is one of the most frightening movies I have seen in a long time.

Hapgood pays homage to the horror movies of the 70’s it’s the kind of horror I grew up with and it’s the type of horror that I prefer.