I can totally explain...

Oh my gosh, its been so long since I updated my blog I forgot my password … lol, but see what had had happened was.


I know, I totally fail at keeping my blog updated but hopefully most of you are following me on my Facebook fan page, Twitter, and or Instagram. For those of you who aren’t the two biggest reasons I haven’t been on top of my blog game are:


The 1st is that I had to break my lease and have the VA help me with an emergency move. The guy next door started using and then selling meth from his apartment, and towards the end it got really bad like Breaking Bad with a side of Sons of Anarchy bad. I was beyond stressed out, wasn’t getting any sleep let alone getting any writing done and updating my social media was the furthest thing from my mind =(  But I moved into an amazing safe place that’s close to my mom’s. I am not totally settled in yet, but I am sleeping way, way better and I’ve started writing again and let me tell you its about damn time!


The 2nd reason is actually kinda cool. I have been on the road promoting and marketing basically since March and it has been A-fucking-mazing! I have met so many kick ass people that its just unreal. Here are the links for the albums posted on my fan page =D
LA Book Signing 2015


World Horror Con & Coca Cola World ATL
Seattle Crypticon 2015
Rose City Comic Con
Let me tell you one thing about self-promoting. It is a beast! It is absolutely sink or swim, there’s no middle ground where you can just float or dog paddle, it is absolutely sink or swim. For me I always just jump in to things head 1st in the deep end. These last few months has taught me a lot. Five years and 11 publications later all of my visual branding is uniform. My convention theme color is grey (because I’m from Seattle) because my brand is my name and not the logo I swapped the T from Crystal with an ax and the last O from Connor with a skull. w/the tag line A Trusted Name in Terror. From now on this is how I will display it on promotional material. Bad ass uh?

This year I offered two tour shirts (one was red, the other grey) that I sold at my booths and book signings, but as far as the sales went one did not out sell the other so I’m not sure which one was the favorite. 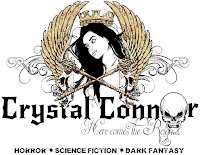 However, I updated my logo and this is the 1st time that I’ve debuted it. Ta-Da!

I am so in love with this logo so moving forward this logo will be on a dark grey tee at every convention and book signing and since people liked both of the tees above I will continue to sell those but not both at the same event. That way not everyone is walking around in the same tee and it will help stretch out my inventory.
I’ve also have been working really hard on the branding for In the Foothills of Mt. Empyreal The End is Now, one of the books I wrote with Lori Titus. Even though I am the one who designed these images I really can’t dominate the visual message, so to keep all of my visual branding uniform I included a skull to anchor it to my brand. These books were published in 2014 but I have been working on these logos all this time to get them just right, and I am going to say that it seems like all of my hard work has paid off because they are just as gorgeous as the ones I did for the Crystal Connor logos
﻿﻿
Oh my Gosh! I forgot to tell you! On Oct 31st 2015 which is only 38 days away I will be a vendor and a guest panelist at my very 1st international convention!!! Dudes! Its in Canada and all the proceeds goes to charity! How awesome is that!
IFcon Victoria

I am so super excited plus I thought that would be the last con of the year but its not because the weekend of the 13th I am heading back to Portland for The Living Dead Con! Dudes, this has been one hell of a year.
Living Dead Con
I am currently working on two new books and securing dates for my 2016 convention and film festival and I have something big simmering on the back burner but I don’t want to mention it yet because I don’t want to jinx it
Well I don’t wanna take up too much of your time, just wanted to touch base and let you all know what I’ve been up to <3 o:p="" ttyl="">
Posted by From the pen of Crystal Connor at 9:07 AM