A lot has happened since the last time you heard from me and not all of it was good.


Explore the inside of an active volcano.

For longer than I would like to admit I’ve been lost in a long dark tunnel. I am usually a good judge of character, and I am pretty selective of those I allow in my inner circle but in Dec. I was completely. You’ve heard it all before: tall, dark & handsome  and charming of course but it didn’t take long before things took a turn for the worse. I know that hindsight is 20/20 but I saw the signs and knew what they were when I 1st saw them and quite frankly I find it inexcusable and reprehensible that I ignored them. I knew better. I know better. I did this to myself.

It wasn’t as bad as it could have been, and though it lasted longer than it should, thank God it was relatively brief .When it was finally over I felt so…fucking…stupid and ashamed. And of course I didn’t talk to anyone about it because I made my own bed. I just told myself to sleep it off and cry it out but I ended up staying in bed for almost a month. I wasn’t sleeping very well, I wasn’t eating very well, and I didn’t want to be around anybody because I was in such a bad mood all the time and would start crying for no reason. I wasn’t even writing and when I finally realized that I tried to snap myself out of it. I write for several hours every day so it’s even startling now that it took me so much time to notice I wasn’t.

My saving grace, my guiding light at the time was my Yorkie Terrier Munch. I had joint custody but she was spending a lot of time with me, more than usual, and I know for sure things wouldn’t have turned out the way that they did if it weren’t for her. I got out of bed and made it all the way to the couch, started writing again and was beginning to think that things would be ok. Munch spent time over a long holiday weekend camping…

The ‘official story’ is that on Friday eve she was snatched off the trail by a hawk. I had no idea that she was dead until late Monday night/early Tuesday morning.

Back into the pitch I went.

Something went wrong inside of me. I was so livid, consumed by it completely, so much so that I was afraid of myself. I really thought that I was going to really hurt someone and at that point I didn’t care. I was existing in this state of blackness, red around the fringes. My chest was hurting all the time. My hands were trembling, the slightest thing pissed me off but the truth of the matter is that I was already mad. I was praying to God but I didn’t mean it so naturally there was no relief.

One day my sister stopped looking at me like a sister and started seeing me thru her physiatrist eyes and I knew that just one more outburst and she was going to have me held for a 48hr observation. Then just one day out of the blue I just said ‘please’ and that time I meant it.

I went to bed and actually got some restful sleep. When I got up I started digging around the want ads looking for another dog. Right away an ad popped up that grabbed my attention. An older lady had a puppy she couldn’t handle anymore due to their age differences. She was 84 and the dog (a yorkie/terrier mix ?) was a ‘puppy’ free to good home.

When I called her we talked for a while and I found out that her grandson helped her post the ad and that she took the picture of the dog down because over one hundred people had called and she felt bad that the operators at bell were so busy just because of her. We were on the phone for an hour actually and she said that out of all the people she had talked to she knew her dog would be safe and loved by me. Whatever was wrong with me I felt it break when she said that. She gave me her address and I panicked because it was a two hour round trip and my car needs to go to the shop. But with a wing and a prayer I made it there and back.

The yorkie/terrier mix puppy turned out to be a beautiful 15pound 3year old  extremely active Rat Terrier named Ceaira. I fell in love with her instantly and so did my family. She’s the perfect fit for my life. Even though I still need to deal with how I feel about allowing the wrong person in my life and the grief of losing a dog she’s  helped me get back on track.

I have no idea how I got anything done these last few months but I did. The Spectrum Trilogy is complete and In The Valley of Shadows is in the rework process as we speak. The current book I’m working on which has nothing to do with the trilogy is moving along nicely. With 42,676 words and 139 ‘book pages’ I completely changed my mind and want to explore a different direction but it’s easy enough to change so I am not stressing over it.

The one year anniversary  for my anthology is coming up here pretty soon, sales have slowed down a bit but I am gearing up to tour for the month of Oct. I’m gonna lit a fire under my but for the DVD pick of the week, I’ve seen some really good ones lately but until then, here is the cover for Shadows.

Have a super good day you guys, ttyl 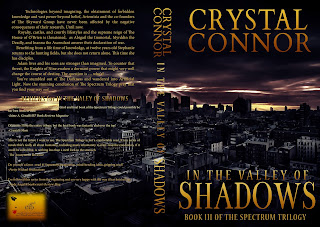