See, what had happened was...

OMG you guys I am so sorry I haven't update my blog in awhile, but I can explain...

So 1st off ...And They All Lived Happily Ever After! is now available where ever fine books are sold (but mostly Amazon) but...a week before my launch date (which was on my birthday) my harddrive crashed and it happened to crashed the day after the final edits. I can not begin to explain how stress out I was, I had two book signings schl'd and the only books I had on hand were the unedited ARC copies. I was so devastated I nearly canxl'd my events and that would have been stupid. I ended up selling the ARC copies at the booksignings but I spent two whole days writing little notes on my wordsmith postcards explaining the errors in edits and begging for leniency. Everyone was pretty understanding and both booksignings went very well. Actually it was more fun than being at a convention!


﻿
﻿
﻿
﻿
﻿﻿
﻿I was also interviewed by the very sexy Morgue Anne, host of the Sex and Death podcast! Click to watch.
Book Launch interview

I am really going to try and get a handle on updating my blog and fanpage so that you guys know I'm still alive and kicking and what's going on as far as the writing goes. ...And They All Lived Happily Ever After! has been doing very well, things are moving along with Book III and I have two more projects that I am working on that you'll all know about coming up here soon =D

But for the most part like I said I am going to do my best to be more active online but its hard because when things are going realy good for me it sucks for those of you who are following me because when I'm writing I'm not updating my blog or posting to facebook. But I am going to work on it I promise.

Two big announcements before I go...Next week I will be on tour promoting the anthology and there will be an audiobook! I'm super excited about both! Here are the dates for the tour and I'll leave you with a teaser from the audiobook!
ttyl
Crystal 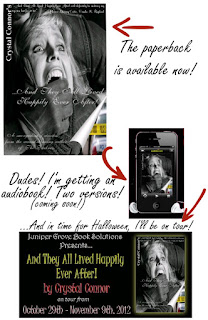 Click to listen...
Audiobook Teaser
Posted by From the pen of Crystal Connor at 9:36 PM