Crystal's DVD pick of the Week 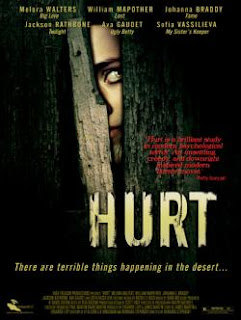 “Heaven has no rage like love to hatred turned / Nor hell a fury like a woman scorned” The quote by William Congreve is amplified a thousand-fold when the female betrayed is an 11 year old girl. Alison Lea Bingeman & Barbara Stepansky’s Hurt erase the line that divides the role of villain and victim while swiftly transitioning through the emotions of love, betrayal, hatred and vengeance.

The 2008 High Treason Productions races between the genres of Horror/ Thriller and Drama with the intensity of a world-class roller coaster but director Barbara Stepansky takes her time getting us there. Hurt is tense and its slow pace is what makes Hurt so sinister.

Hurt drops us off with the Coltrane family that is going thru turmoil after the death of the husband and we watch the mother Helen move her two teenage children Lenore & Conrad from a high-end home to a trailer out in the desert to live with her brother in law Darryl while they wait for the settlement check from the insurance company. It’s extremely hard to watch this family try to make the best of their circumstances.

Out of the blue the late husbands lawyer calls the Helen to explain that her husband was trying to save a foster child from an abusive household and promises a monthly settlement if she’ll take the girl in…but low and behold things start to spiral out of control once they take in 11-year old Sarah.

Because you’re so distracted with the controlling creepiness of Darryl, his obsession of his late brothers wife and the isolation of the desert setting you don’t see it coming so once the plot reveals itself to you it will leave you with the feeling that you’ve just been hit by a speeding truck.

We learn that Helen’s husband was not the knight and shining armor that Helen once believed him to be. Her husband had a second family and Helen is no random foster child, she’s his daughter. And from that revelation we see why it is that Hell has no fury like a woman scored.

Helen put all her hopes and dreams into her husband, her entire world revolved around him; likewise the greatness man on the face of the planet according to Sarah was her father her very one super hero that tucked her in and kissed her goodnight…and he betrayed them both. The disaster that results from this man’s selfish carelessness gives us a front row seat to witness the frightening apocalyptic power of the fury of a woman and girl betrayed.