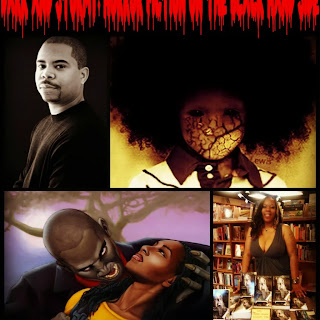 LOL. Just kidding. Oct is a big deal for me being that I spin tales of horror from the tip of my pen. And I am happy to say I have a lot going on the month.

For those of you in Seattle on Oct 3 I am one of seven authors that will be doing a reading at an event called 'Book Date with Morgue Ann' at the rendezvous jewel box. Come by and hey and get your books signed.

If your not in Seattle don't fret, I am back on tour for the anthology starting on the 17th (whoo hoo) and on the 25th I will be on a panel discussion via Skype at the Alien Encounters con held in the ATL so hopefully you can either come see me in person, chat w/me online, or call in on Skype...until then have a good one.

Sent from the digital pen of The Wordsmith.

Posted by From the pen of Crystal Connor at 11:16 PM No comments:

How is it that we are so ill informed in the height of the ‘information age?’

Things you'll never see black people doing in a horror movie thing # 5
Get attacked by a wolverine in its natural habitat.

Online assassination. This is a horrible term, but basically that’s what it is and its someone I think can’t be talked about enough. As writers and readers we are all too familiar with the personal attacks in the form of 1star reviews. The latest victim of this online bullying and character attack is author Melissa Foster. If you pay attention to this sorta thing you know the accusation was that she bought ‘hundreds’ of fake positive reviews from a company called Fiverr.


What you may not have heard is that the person making this calm flat out lied about everything that was said. The legal department of Fiverr issued a statement reporting that this person never worked  for their company and the statement from the author reveals the person responsible for the blog that went viral as disgruntled.

Authors are not the only ones subjected to this type of online assassination. A young couple who owns a neighborhood restaurant was contacted by Yelp for ‘advertising opportunities’ being small business owners who were very happy with their current marketing plan, which in part was due to the positive customer reviews posted to Yelp declined. Over the next several days the positive reviews posted on Yelp were filtered out to allow room for the hateful negative reviews that directly impacted their business.

The truth of the matter is customer testimonials and reviews are the lifeblood of small business owners. And we as authors are very much indeed small business owners. The thing that I was the most unprepared for when I made the transition from fan to author was the realization that writing and selling a book are two very different things. Social media is a very powerful tool in marketing and growing a fanbase, but as you can painfully see, three years and four books later, this is something I am still struggling to stay on top of.

I think the reason I am having such a hard time with it is because it's so impersonal and I think that’s the biggest reason it's so easy to ‘kill’ a person by destroying their social media reputation. Because we spend more and more time online and less time socializing face-to-face its become way too easy to throw the proverbial stone as we click ‘share’ to shame someone’s bad behavior.

This person calms that everything about Melissa Foster is fake ‘fake reviews, fake awards, fake everything’ Why would someone claim fake awards when that is one of the easiest things to verify? She is listed as a winner or a finalist on every single announcement page of those contest websites. Her awards are not fake. She actually won them. Yet the article that was meant to ruin her career or at the very least her reputation was shared without so much as a 2nd thought.

The statement issued by Fiverr was weeks ago. The attack of Melissa Foster is old news. Yet the link to the blog which published all of these lies and launched this personal attack against her is still being shared. There is even an update to the original posting thanking the followers for make the post 'the most shared to date.' This is the reason vitriol spreads so quickly over the internet. One just has to wonder how is it that we are so ill informed in the height of the information age?’ Or even still why we are so gleefully willing to celebrate fall from grace, jump on the band wagon of judgment before we even know if the person actually did anything wrong?

Author and blogger  Dicey Grenor had this to say, and needless to say at this point but I co-signed on every word:
***
I've read several of the authors's books and LOVED their works. Some of which I'd give 10 stars if possible (Emma Chase's Tangled, for instance). I know many other people who genuinely love those authors' books as well. It's amazing how people so readily believe the negativity and assume the authors would lie, more so than considering the possibility that the actual original poster could have been the one posting lies. I mentioned earlier that you can't believe everything you read on the internet, especially something without a verifiable source or proof. Apparently, that was ignored. Fine. I posted a public statement from Ilona Andrews. It was ignored (or deemed an untruth) as well. Fine. Which seems terribly unfair to the authors affected by this, doesn't it? Wouldn't we want someone to do their due diligence before assuming the worst, if we were accused of something? Shouldn't we be more discerning and sensitive to both sides when reading stuff on the internet? I mean, would a legitimate accusation have been so one-sided? No. It would have made an attempt to include the authors's responses. The fact that it didn't, alerted me to it being more reviewer/author bullying/harassment that I've seen a lot of lately. It's amazing to me how low-star ratings are deemed trustworthy, while 5-star ratings are met with skepticism--as if a book couldn't *really* be that good. I'll leave this thread with one last thing...that will probably be ignored as well. I'm taking the time to post it for those really interested in the TRUTH. Melissa Foster has been posting publicly about this mess, clearing it all up, from who the disgruntled initial poster actually was to how she's handling the situation. This is her most recent post:

Karma is a b*tch, and the owner of that website is about to find that out. A concerned citizen contacted Fiverr's legal department and received the following verification of the false accusations. Please share this publicly and stop the hatred! I've removed her name to protect her from being attacked as we were.See, most people ARE good xox

From: Fiverr Legal
***
The truth will set you free.
Posted by From the pen of Crystal Connor at 8:26 AM No comments: